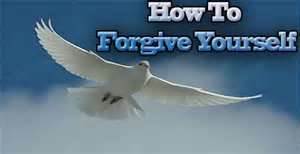 While discussing the whole situation with my wife last night, she basically told me, “you’re being harder on yourself than even I’ve been….I’ve forgiven you for all of this, but you clearly haven’t forgiven yourself.  And you need to.  Perhaps you should go back to therapy with (my therapist’s name)?”

I responded. Yeah, I know I haven’t.  I wear the “scarlet letter” on my forehead and always will.  It’s a burden of guilt and shame I will always carry.  And perhaps that’s a good thing. It would have been worse if I had let myself ‘off the hook’ easily and quickly.  And perhaps it’s just time. Perhaps I will eventually, because I truly believe that life is short and you have to let go of things. You must.  Why waste your life on the past? On regret?  I dunno.

Despite what some that visit here think, I’ve been very consistent and stellar in my self-criticism over all of this.

So have I gone too far the other way?  I need to forgive myself?  If so, how?  Self-forgiveness after an affair might be the most elusive hobgoblin of them all.

and so I read this..and it hit home…even if I’m still not quite sure how to proceed — (sorry in advance, but it’s long):

HOW TO FORGIVE YOURSELF FOR AN AFFAIR

Stop for a moment and listen to this: You have the power to punish yourself for the rest of your life. You can carry the burden of past mistakes with you (all the way to the grave). And you can nail yourself to a cross everyday. No one can stop you. BUT… you ALSO have the power to forgive yourself, overlook your mistakes, and let yourself off the hook. BOTH choices are yours to make. But you can’t choose one and have the other.

The key to forgiving yourself can be summed up in one word: permission.

That’s what makes self-forgiveness such a challenge. Too many of us are waiting on “a sign” or “someone else” to come along and give us permission to let go of our past.

News Flash: THERE’S NO ONE HANDING OUT PERMISSION SLIPS!

Like breathing, sneezing and walking…forgiving yourself is something YOU have to do FOR YOURSELF.

The Seduction of Guilt

Guilt can become a very seductive state of mind. Some people would rather DIE than give up the guilt they carry. I believe this comes from the “suffering” mentality we have developed over time. In the West, it’s common to believe that if we use guilt and blame to mentally beat ourselves up, we’ll force ourselves to become better people.

Feeling guilty will NOT help you improve. It’s been proven time and time again. Pain doesn’t lead to positive change. The fact is, beating up on ourselves has never produced anything but self-loathing. Think about it. If you keep inflicting pain on yourself, it’s only a matter of time until you wind up hating who you are.

Guilt is the REAL enemy here!

Why? Because it focuses on the “person” being wrong, instead of their behavior. This is a destructive (rather than a corrective) response. Instead of wallowing in guilt and self-pity, a better choice would be to forgive yourself while accepting responsibility for your actions. If you must condemn…condemn the mistake—NOT the mistake maker.

How to Take Responsibility Without Taking on GUILT

Make a note of this: Consequence and punishment are NOT the same.

Some very good reasons for forgiving yourself:

The Art of Self-Forgiveness

It’s not always enough to be forgiven by your partner. You also must learn to forgive yourself.

Guilt is a very destructive and deadening emotion. Holding grudges, hanging on to bitterness or remorse directed at yourself puts you in an emotional prison. “Unforgiveness” has been linked to cancers, heart disease, and other serious illnesses. Learning to forgive yourself isn’t just an act of kindness, it’s the best defense against an unhappy life. The act of self-forgiveness changes the energy and physical structures of your cells and DNA.

Mistakes call for correction, not punishment.

The starting point of self-forgiveness is letting go of the “expectancy” of punishment. This means no more beating yourself up, or believing you must “suffer” to “pay” for your mistakes.

Does this mean your action will never have consequences? Not at all. There’s a universal law called “The Law of Cause and Effect,” which is always in motion. It requires no help from me (or you) in deciding just how things will play out. Our only job is to be willing to see things from the best light possible and take responsibility for change.

Stop trying to rewrite the past in the present.

” The essence of True Forgiveness Is the giving up of
all hope of having a better past.” —Gerald Jampolsky

You’ll never be able to change the past. But what you can change is the meaning you carry about the past.

Maybe you did cheat. You may have even manipulated, deceived, denied, and willingly broke wedding vows. But let me ask you this. What does any of this truly say about you?

This all depends on the story you tell yourself.

It could mean you still have some lessons to learn. It could mean that deep inside, you have places ready and waiting to be healed. It could signal an inner conflict. It could say many things…but what it DOESN’T say is that you’re a bad person, or that you deserve to be punished or to suffer as a result.

Fact is, mistakes don’t call for punishment; they call for correction. Punishing yourself doesn’t change your behavior—only self awareness does that.

Choose to accept (instead of rejecting) yourself.

The choice to forgive yourself is the choice to love yourself. We can’t avoid choice. Abdication of choice IS a choice. Self-forgiveness carries the implication that all events are purposeful and ultimately worthwhile.

6 thoughts on “Forgiving Yourself After the Affair”