1.  Men are different than women in the approach to sex and it’s biologically based.  Men are extremely “visual” when it comes to sex.   As much as you ladies like to think that somehow men are nothing more than “women with penises”, we aren’t. We are very different.  We are wired in our brains differently.  And therefore, although it’s tempting, you can’t view (and judge) men through your female prism. Instead, you need to understand that we are very different from women, including our approach to sex.

“Evolutionary psychologists argue that ancestral men, to spread their genes, had much to gain from having sex with as many women as possible. In contrast, given the biological limitations on the number of children women could have and raise, they would benefit from being selective — choosing mates with the best genes.

Thus, men evolved a sexual psychology that makes sex with new women exciting both to imagine and to engage in, and this made men especially responsive to visual signals of sex.

While some male strip clubs exist, they are dwarfed by the number of female strip clubs.  You have Hooters and Tilted Kilt, which are about female beauty among the servers (along with buffalo wings), but as far as I know, there is no Peckers or some similar thing catering to women.  Why?  If there was a market for it, I assure you that a chain of restaurants staffed by servers who were exclusively good looking and buff men would exist.  And frankly it would be invented and franchised by men! — we will make a buck any way we can.   It’s not a conspiracy that this type of franchise doesn’t exist, ladies — you just aren’t as interested in nude men and watching sex the way men are interested in nude women and watching sex!  Some of you are, yes, but in general, you are not anywhere near as interested as men are in looking and leering at the opposite sex.

We aren’t just visual on our computer screens, but also in real life.  If a man sees an attractive and desirable woman, one of the first things he does is wonder how she looks beneath her clothes. With so much curiosity, it’s easy to imagine why men can’t wait to see and learn about different women’s body parts. And another thing that most men do, each time they see a sexy celebrity on the tv or in a movie, many men will go online and look for a few nude movie clips of that girl to see how she looks naked.  It’s how we are wired. Do women do this? Probably rarely.

I once read that it takes a man  less than 4 seconds to decide if a woman is attractive and if he would ever be interested in her.  We use looks more like “triage” — we separate women immediately between those we know we will never be interested in from those we might be interested in, then we move in and find out what they are all about. Women don’t do this in the same way.  Have you ever heard a woman say that initially she wasn’t attracted to a man, but the  more she got to know him, the more sexually desirable she found him?  Yes. You hear it all the time. You will almost never hear a man say that because it isn’t how we think about looks.  Looks to us are more like a “floor” — you must be above the floor. If you are HIGH above the floor, so much the better, but you can’t be below it, because if you are, we will never think of you as anything more than a friend.

In general, men are visual in a sexual way far more than you are, ladies.  It’s just a fact. Reality.

2.  Men are more interested in sex than women.  Sorry, but it’s true, as much as some of you would like to argue.  Study after study illustrates that men’s sex drives are not only stronger than women’s, but much more straightforward.   As one study said,

Roy F Baumeister at Florida State University, Kathleen Catanese at a Midwestern college and Kathleen Vohs, a professor of marketing, set out to find the truth about which gender had a stronger sex drive, reports Oxford University Press, and concluded that the answer was clear:

“There is a substantial difference and men have a much stronger sex drive than women.   To be sure, there are some women who have frequent, intense desires for sex, and there are some men who don’t, but on average the men want it more.

Every marker pointed to the same conclusion: Men think about sex more often than women do. Men have more sexual fantasies, and these encompass more different acts and more different partners.

Men take more risks and incur more costs for sex. They want sex more often than women, whether one is talking about young couples or people who have been married to the same person for forty years.

Men also want more different partners than women want, and men like a greater variety of sex acts than women do.

JERRY: It’s easier for a woman not to do it than a man.

JERRY: We have to do it. It’s part of our lifestyle. It’s like, uh.. shaving.

ELAINE: Oh, that is such baloney! I shave my legs.

KRAMER: (Making a point) Not everyday.

In masturbation, men can escape into their fantasies. They do not have to worry that their woman will criticize them. She’s not able to say, honey, do it this way, or honey do it that way. She can’t suggest that they do something differently.   It’s the easy, guaranteed, uncomplicated way to get pleasure. That may not be what you wanted to hear but it is what men sometimes think.   It’s not a knock on our partners. Sometimes, we just would rather take care of it ourselves and in a different way. Don’t be intimidated or insulted by this. It’s really not about you.

Will he love you less because he sees other naked women?  No, somehow watching porn doesn’t seem to affect most men, unless they’re addicted to it and can’t live without it.  As pointed out, our brains are wired visually for sexual stimulation more than women’s. It’s just biology. We like seeing (attractive and desirable) naked women.  It really has not much to do with you (unless your partner, due to changes and time, no longer finds you physically attractive.  Then it will have something to do with you).  If you trust your partner, assume that they find you attractive, but don’t egotistically assume that they think you are the only attractive woman in the world either, and don’t be bothered by this fact.

Don’t judge our eyes and we won’t judge your interest in hot romance novels or “50 Shades of Grey”.  Many women love romantic movies and get a little turned on by them.  Or get turned on by various types of female-oriented novels.   And she would definitely be able to relate to the feelings of love and affection the actors share on screen. A woman may enjoy the movie, but does that mean she’s falling for the actor in the movie because she felt all those emotions?  Heck, she may even wish her man was more like the romantic actor in the movie. But does that really change anything in real life? No!

I would caution any of you to not set up unrealistic expectations of your partner. You could lose your relationship over it.  It’s an absurd expectation to think that your partner shall, and must, think of you and only YOU in their heads when they think about sex.   That they will never notice anyone else that is attractive or never will have a sexual fantasy that doesn’t involve you.  Seriously.   It’s a standard that almost anyone would fail. And do you really want to put your partner in the position of “cheating” on you in their head and having to lie about it?  It’s silly. It’s self-destructive. It’s pointless. It’s ground largely in your own insecurities.  I wouldn’t suggest trying to set this sort of standard for your partner. These types of controls would drive most people away.  Expressing deep-seeded insecurities about your body and sexuality is not going to exactly endear a man to you. Quite the opposite.  Extreme insecurity, especially when expressed with angry, controlling demands, is an incredible turn-off.  Insecurity, and its expression, is one of the biggest sabotagers of relationships.

I’ve heard this many times and I believe it — “It doesn’t matter where you get your appetite, as long as you eat at home.”   So true.  Instead of fighting it, why not embrace it?  You might find that you like it too! Lots of women do and it can be great fun to watch as a couple! It will open you up to new things and ideas and heighten your sexual response. 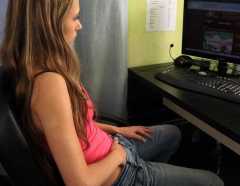